Images. Like reflections of a kid in a rain puddle. A family holding the funny dogs. An engaged couple with their boots walking a dirt path. I have seen thousands and thousands of faces over the years. Images. I have captured weddings and families and seniors. Some images very memorable with lots of forethought and some images done hastily in a hurry, quickly composed. Images. A moment in time recorded forever. Many end up in the little trash icon on the computer. But some. Some images make it through the sorting process to last forever.

We at Photodelux often wonder what people do with these digital images today. Do they print them, leave them to live on the computer or hang them on a wall? When my kids were young I had a little school picture of them to stick in my wallet. Thats what a lot of men did with a wallet print and still do. I wonder how many of my images have been printed up and placed in a wallet like my wife Vicky's dad did so many years ago.  Here is that image: 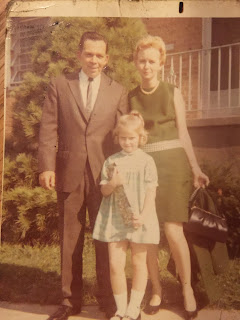 See,  Vicky’s dad passed away from a massive heart attack in a bowing alley in Independence, Ky in 1976 when she was 13.  He had been suffering some heart problems and well it was just his time. So sadly James Kincaid went out in to eternity and left a wife(Nora) and 3 girls. And all the images dear to him were at a standstill. They became his belongings.  At a kitchen table many years later it is now Fall of 2017.  At her mother Nora's house, Vicky is confronted by a wooden box which contains her fathers wallet unopened for almost 40 years. Wow. She opens it. Inside the billfold, among other things, is a picture of her and her parents. Yes, bring on the tears. Images. Slices of life.

Of all the hats I wear, photographer is at the top many days. And the fact that someone close to Nora and James, brought a camera that day, recorded the negative and had a paper print made at the local Photomat is not lost on me. It’s what we modern day scribes do. It is the right thing. Record a slice of time for precisely the moment when a woman can look back to when she was a little girl and realize her fathers love for her so many years later. It’s an incredible responsibility to be a modern day scribe. Images.

It was my privilege to photograph my friends Steve and Katie Poitinger and family in brisk 40 degree weather at Armco Park this week. It was the day before Thanksgiving. We have a history together.  See, I was in my teenage years and Steve was a young coach and teacher at Franklin High School. Where together in 1982, we won the mid-Miami League Championship in both track and boys soccer. That league is now defunct but the memory and bond still last. 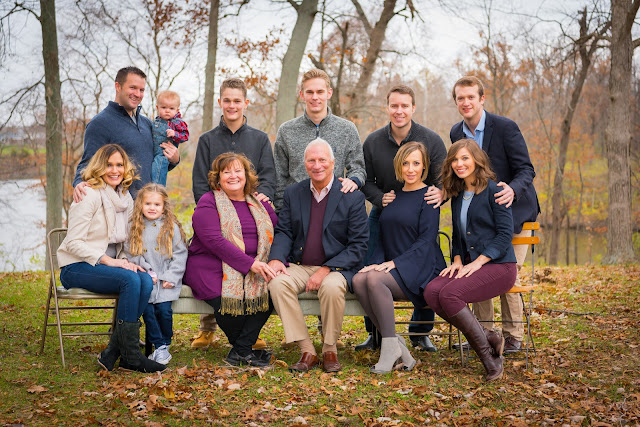 Coach P was more than my track coach. He actually taught me how to drive because he doubled as the drivers education teacher during the summer. He encouraged me to go participate in summer track with the Mound City Dashers out of Miamisburg where I pole vaulted, ran sprints and even threw the javelin. When I made it to the state track meet in 1983 he and Katie bought me the commemorative t-shirt to remember the occasion afterward. I still have that shirt around here somewhere, Ha. Coach P moved on to arch rival Lebanon where he retired.

So fast forward to summer 2017 and a day where our bodies are suffering some wear and tear.  We decide to meet for breakfast in Lebanon and the discussion at some point turns to a family portrait. I say it would be my privilege to photograph an image of the family. So now assembled, forming smiles, a button is pushed.  And all I can see is a little girl and a baby boy in front of my camera who someday will have a record, a slice of time to bookmark this season with people who are loved and adored.
Posted by Tod - Cinci Brocat at 3:37 PM No comments: